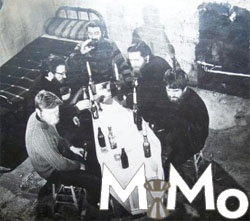 It's always bittersweet when things come to an end. And now, after over a hundred Mixology Mondays, it's time for the monthly cocktail party to come to an end. In honor of that end we're celebrating with an Irish Wake. In the midst of the online discussion leading up to the deadline the discussion the degree of difficulty got ratcheted up a notch to Irish whiskey tiki.
The early discussion instantly led to a variant on an Eastern Sour, Bourbon's shining beacon in tiki. However, I wanted to go another way. I decided to go a different way. My first thought for Irish Whiskey in a cocktail defaults to Irish Coffee. So with that in mind I set about making a tiki drink with coffee flavors. I started with a Mai Kai classic drink, the Black Magic. In addition to the coffee flavors I wanted to bring a lot of tiki spiced flavors.
Irish Magic:
2 oz Irish Whiskey
1 oz lime juice
3/4 oz coffee liqueur
1/2 oz grapefruit juice
1/2 oz cinnamon syrup
1/4 pimento dram 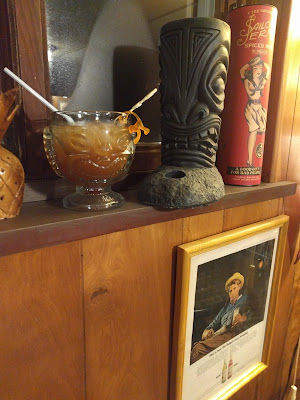 The spice comes through but doesn't dominate and the coffee really shows up on the finish.
I'll miss the camaraderie of the online cocktail party that is MxMo. I admit that I haven't been as active as in the past, but that doesn't mean that it won't be missed.
Thanks to Frederic over at Cocktail Virgin not only for hosting this month, but for keeping it alive a while longer.
Posted by Mike Basista at 12:04 PM