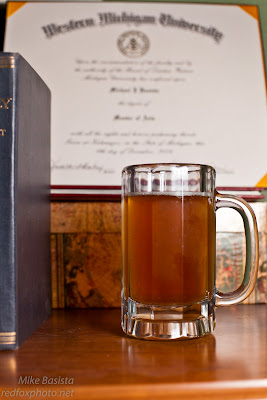 My personal drinking history began somewhat late in my life compared to most.  Rather than getting wasted on whatever alcohol my friends and I could find in high school, I didn't start drinking until I was 21. (Yeah, I'm the one).  Because of that I don't have that one alcohol that I just can't drink because I drank an entire bottle of it when I was a Junior. The late start also means that I avoided the bad booze. With the exception of a drink of Natty Ice that I had by mistake, my first beer was one that a friend came back from Germany with a taste for, Erdinger's Hefeweizen. Following that I discovered Franziskaner, which is still my favorite beer.  I also started drinking things like martinis and throwing cocktail parties.


In addition to drinking expensive stuff I started right in on making my own alcohol. My first attempts were at making mead. A friend and I split the expenses and went out to make 2 five gallon batches, 1 of regular mead, and the other a strawberry mead. Shockingly, with virtually no working knowledge of what we were doing these failed spectacularly, but what I had tasted during the process had hope. I had successfully made alcohol, it's just that the window of it being drinkable was about 2 days. These experiments my senior year at college, was the beginning of that period when homebrewing was just starting to become more mainstream. So for Christmas one year my father picked up a brew your own beer kit from a science themed gift store.


Alas, this coincided with me beginning my wandering period of life where I had 7 different addresses over the course of 10 years. Also at no point then did I have a basement or an out of the way place to brew it. Finally after I had bought my current house (which has 2 basements!) I dug out the kit to see what I could brew up. This is when I learned that the expiration date of yeast is something to pay attention to. While this batch failed, it got me started back on the path of brewing that I'm currently on.
Posted by Mike Basista at 2:21 PM 1 comment: 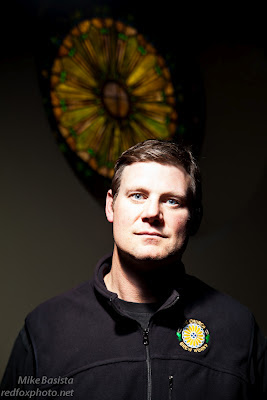 By now everyone knows the story of Church Brew Works. Situated in the former St John the Baptist Church in Lawrenceville they have been crafting brews since 1996. Brewery Manager Steve Sloan has a long and impressive resume, taking him everywhere from The Saint Louis Brewery to New Zealand to Firestone Walker before bringing him to Pittsburgh and the Church Brew Works.
Posted by Mike Basista at 9:31 AM No comments:

I'm off in Virginia for a photo assignment shooting OpSail for Spinsheet magazine. That means that I'm going to be on one of these bad boys. 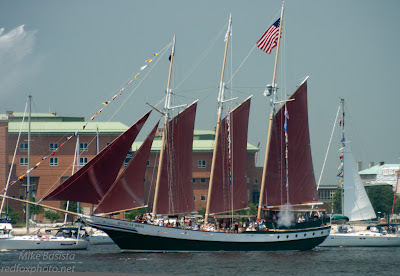 Naturally this has me thinking about what is probably the mother of all Tiki drinks: Grog. I'm not thinking of the classic Tiki drink Navy Grog. I'm talking the real thing, daily rum ration, lime juice to prevent scurvy grog.

No one know the exact recipe for grog, likely I suspect it's because there wasn't one recipe for grog. I've seen and heard many different versions of "original" grog recipes. Everything from "1 of sweet, 2 of sour, 3 of strong, 4 of weak," (which is patently wrong as this is a punch recipe) to 1:1 of rum and water.

Up until 1972 the British Navy regulations specified 1 pint of ale per day per sailor. This was fine while they were sailing the cold and gloomy North Atlantic close to home. As they began expanding their travels the ale soon became impractical. It would often go bad before the men could drink it. So the Admiralty responded in perhaps a strikingly practical way. They allowed the ale to be replaced with whatever the local drink that they could procure. In the Caribbean that meant rum. That's the first ingredient for grog.

The second important ingredient was citrus juice. Scurvy was a huge issue for sailors going back at least to the Romans, probably earlier. As early as 1497 citrus was known to have a curative effect on scurvy, though vitamin C wasn't isolated and identified until 1937.  Thanks to Admiral Edward Vernon of the British Navy, (known to his sailors as Old Grog for the grogram cloak that he wore) in 1740 citrus juice was added to the daily ration of rum. At this point we can say that we have grog consisting of water, rum, and citrus juice. Sailors likely would have added whatever they had handy to make this drink more palatable.

Me being me I decided that it would be interesting to play with a drink based on the idea of grog that would have been Piratically inspired. So I decided to create the drink below with the idea of an English Privateer using what they had available from successfully taking ships in their own version of a trading triangle. Scott Smith isn't your typical Brewer, if such a thing even exists, sure he makes good beer but that isn't the end of his efforts.  Scott seems to be everywhere these days either coming up with innovative funding methods like his Good Beer Investment Program or helping to raise funds for Aboard Autism Connection of PA and Bike PGH with the Keg Rides for the release of Pedal Pale Ale. East End Brewing Co's beers are at all the best tap spots in the City and will be at more once their planned expansion is completed. In the mean time, you can fill up one of their distinctive growlers at the Pittsburgh Public Market or at the brewery.
Posted by Mike Basista at 11:50 AM No comments: