This is it my friends, assuming that we haven't already been wiped out in a cataclysm, it's only a matter of time now before the end of the world. I hope that it's been a good one for you. In the event that we are still here to read this, let's work on easing that transition with a nice drink to celebrate what it is that is coming to an end today. December 21, 2012 marks the end of the 13th B'ak'tun, or the long count in the Mesoamerican calendar. A b'ak'tun is comprised of 144,000 days, or about 394 years. On the winter solstice of the year 2012 (CE) the current b'ak'tun will be completed. Obviously this means the end of the world, just as the completion of the millennium signals the end in the western calendar.

To honor the end of it all by what I can only assume will be a meteor strike or some other sort of astral destruction we have the final drink the B'ak'tun (or Long Count). We feature a flaming lime shell for the fiery daeth coming from the sky, soda water for the boiling oceans, and some jalapeno syrup for the burning sensation sure to accompany our destruction. 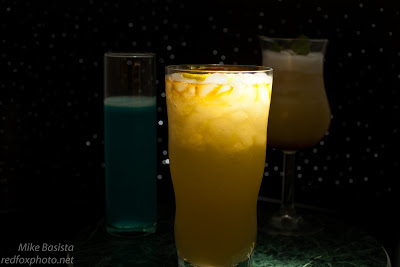 *To make the jalapeno syrup make a 2:1 simple syrup and add 2 sliced jalapeno chiles per cup of sugar. You can control the heat of the jalapeno with the seeds and inner membranes. If you like thing spicy throw in the whole lot, if you want just a little heat and more fruit flavor, remove the seeds and the white inner membrane. As soon as the sugar is dissolved into the water add the jalapenos and let steep for 20 minutes. Strain and allow to cool.

Posted by Mike Basista at 10:00 AM No comments: 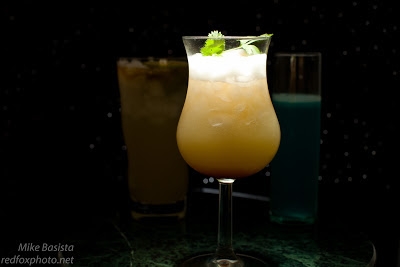 Once again hit up Rated R Cocktails tomorrow for JFL's continuation of the mayhem.
Posted by Mike Basista at 10:00 AM No comments:

First up we're going to explore a key part of the Mayan religion, the cenote.  Cenotes are deep sinkholes or pits full of fresh water in the Yucatan Peninsula  Geologists think that they are tied to the Chicxulub crater, which is believed to be the impact of the asteroid that caused the extinction of the dinosaurs. The Mayans believed that these pits were entrances to Xibalba, the Mayan underworld. The Sacred Cenote at Chichen Itza has been found to contain numerous sacrifices to the gods, including human sacrifices. If we want to get into the mindset of the Mayans that foretold our doom, we need to explore the cenote. 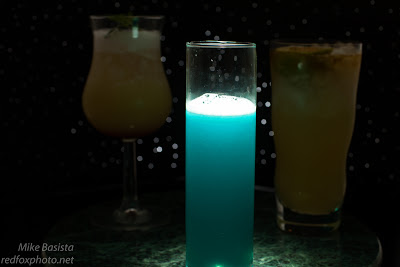 Tomorrow JFL continues the Meltdown on Rated R Cocktails
Posted by Mike Basista at 10:00 AM No comments: