In Defense of Vodka 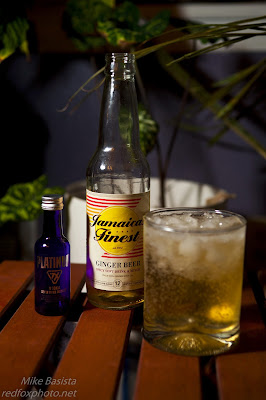 In general vodka is ignored or ridiculed by craft cocktail lovers. With brands bragging about how many times it's been distilled, creating flavors like cake, Swedish Fish, and Froot Loops, and purposefully having no taste it's easy to see why. However, it can be used in craft cocktails to good effect. Such cocktail authorities as Beachbum Berry and Ted Haigh have published recipes with no spirit other than vodka in them.

The important thing to remember with alcohol is that it is a solvent and thus causes some flavors to be heightened and better expressed. The obvious and most common use is in infusions, where any and every thing can be soaked in vodka to infuse that vodka with unusual flavors. But, you can do that same thing within the drink itself. Say you have yourself some locally made, cane sugar sweetened, spicy ginger beer  now you could make yourself a Dark n' Stormy but as we all know that's illegal if you happen to be out of Gosling's. But if the liquor fairy dropped off a nice, crisp vodka, (Platinum 7x in this case,) well then you have the makings of a Moscow Mule. The effect of drinking the ginger beer with vodka highlights some of the flavors from the ginger beer that are either not noticed if drinking it straight or lost if drinking with rum. Likewise if you have a nice vermouth some of the subtler flavors could be lost with a strong gin in a Martini. Perhaps the most important time for vodka in a drink is brunch. There are flavonoids in tomatoes that are only soluble in alcohol (which is why my spaghetti sauce recipe finishes with a shot of vodka,) so the vodka plus tomato juice mix for a Bloody Mary releases flavors that aren't there otherwise. This is why I will always have some vodka in my bar.
Posted by Mike Basista at 3:58 PM