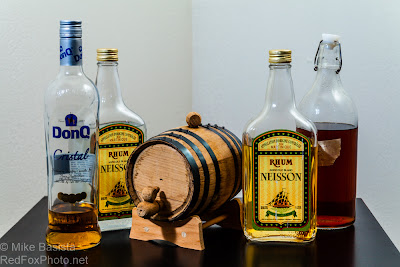 Let me set you at ease, this post has nothing to do with my own impending fatherhood or indeed about me growing older. I am still going to celebrate my 25th birthday next July, (for the ninth year in a row). Instead this post is about small barrel aging at home. Going back to my last 25th birthday in 2012 one of my presents was a 1 liter oak barrel for at home aging. I started almost right way in aging rum. I selected a pretty innocuous rum, DonQ Cristal, with the intent of aging it for almost a year with the idea being of turning it into a roughly 12 year old rum. Alas, I underestimated just how greedy the angels are, particularly in a small barrel, so when I opened it up at 9 months I had less than a 750ml bottle left. It was also over-oaked, it tasted far too much like licking the barrel. Not to say that it doesn't work in certain tiki applications. What I haven't already drunk is visible on the far left in the photo.

Next I noticed that the great Commonwealth of Pennsylvania had Neisson Agricole Blanc on clearance, so I went and picked up two 1 liter bottles. This was an easy decision to add the liter bottle of rum to the liter oak barrel. This time I was more judicious and removed it from the barrel after 6 weeks. This had a most interesting effect as now there is a distinct banana flavor in the nose and it is deliciously smooth. You can see the unaged Neisson on the left of the barrel and the now golden Rhum on the right of the barrel.

Once again though the barrel was empty. Time to try something else. It was also at around this time that the El Presidente really came back onto my radar. This Manhattan-like rum drink makes a delightful after dinner drink and as a bonus I can make it without having to squeeze a lime. I pulled up Jeffrey Morgenthaler's recipe and went with it. I used a bottle of Bacardi 8 that I had sitting around and Noilly Prat dry vermouth. It sat in the barrel for about a month and I just drained it into the bottle seen on the right. The oakiness is noticeable, but not overwhelming. The convenience is amazing though, I can have a really nice cocktail by doing nothing more than pouring 3 ounces over some ice to chill it and then strain it into a serving glass. This will be most useful during my impending fatherhood.

Once again though the barrel is empty and I need to find something else to put in it. I'm leaning towards another rum cocktail or a batch of bitters. Feel free to add suggestions below.
Posted by Mike Basista at 2:25 PM 2 comments: